Spring has turned to summer and mountaineering bears were feeling restless. It had been over a hundred days of lockdown, staying a home to help combat the dreaded covid 19 virus. We had been busy in the garden.

The climbing gear was checked for wear or damage!

And some new gadgets tested.

We practiced our mountaineering skills

and tried our best to keep fit!

So when the travel restrictions were lifted we were ready to go. The Adventure Wagon was packed with all the necessary kit and kaboodle, and at 6:30 in the morning, bleary eyed bears hit the road, heading for one of our favourite areas, Kintail. By 7:30 we were waving to Nessie as we drove past Lochness

and an hour later four very excited bears were starting out from the shores of Loch Cluanie. The mountains looked very imposing and I was wondering if we were all fit enough to climb that high! Well there was only one way to find out! “Onward and upward Mountaineering Bears”

The hills were colourful with wild flowers. Corbett was beside himself running from flower to flower with excitement. On the lower slopes, the pale cross leaved heath was growing side by side with the deeper bell heather and there was a profusion of Spotted Marsh Orchids.

Even the cotton grass flowers seemed plump and extra fluffy.

Higher up the small flowers of the starry saxifrage bloomed in the damp shady places ground with patches of wild thyme on rockier ground. Mountain everlasting, thrift and alpine ladies mantle all added to the display.

All the way up the mountain we were accompanied by the chit chat song of the wheatear as it flitted from rock to rock! Frogs large and small were jumping out of our way. I saw a large gold and black dragonfly laying eggs in a stream and a vivid green emperor moth caterpillar eating its way through the heather.

The track, soon became a path which got fainter as we made our way upwards. It was rough under foot, sometimes muddy and lots of streams to ford. The mountain beckoned us on but no matter how far we walked it never seemed to get any closer.

and then came the peat hags. A chance to teach Alligin the art of bog hopping!

Oh dear! He’s wobbling! Not sure Alligin has got the hang of of this yet!

It’s not a proper mountaineering adventure unless at least one bear ends up with a wet bum! 😂

Gorm Lochan in Coire Lair was a pawfect spot for a rest and an early lunch. Alligin had a wash. Corbett spotted newts and water snails in the crystal clear water while I was just soaking up the atmosphere and Big Ted was soaking his hot paws.

‘Come on bears, mountains don’t climb themselves! Time to get moving’ Rested and refreshed we scampered up the steep grass to Glas Bealach.

From the bealach there were mountains in every direction, as far as the eye could see. We had reached 950m altitude and it would be an easy walk to Sgurr nan Conbhairean summit. But where is the adventure in that! We are Mountaineering Bears and like to do things the mountaineering way! So rather than go up, we went down!

We had instructions to follow but they didn’t make much sense so we followed our noses! ‘Take care bears, this rock smells a bit rotten and loose’

Corbett decided to climb the grass, but that smelt scarier, it was steep, muddy and slippery with nothing to hang on to but loose tufts. I am sure I heard him whimpering.

It is the final slope to the top!

Way hey! We made it! Time for heroic summit poses! Mountaineering bears, are back where they belong.

It felt like a long walk down but the grassy ridge was gentle on our sore paws and we could see Ben Nevis in the distance! So back we trudged through the mud, and the wild flowers, thinking noble thoughts about egg and chips for supper!

Sometimes we go to the sand sidewhere the land melts into the seathat laps gently with foam and tide;so few better places to be…cos it means we are …

And that my furriends is the start of my many adventures as a Mountaineering Bear! 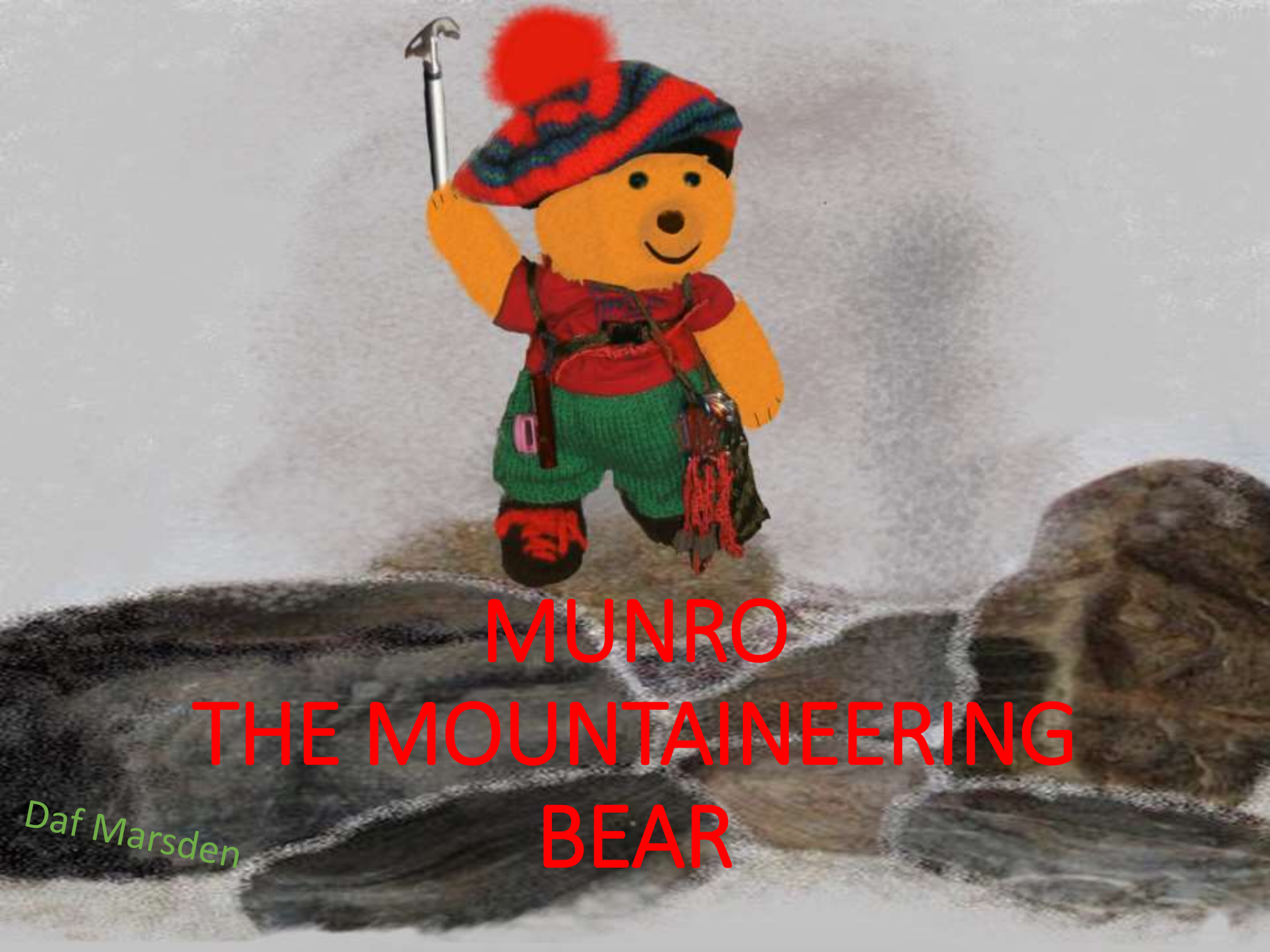 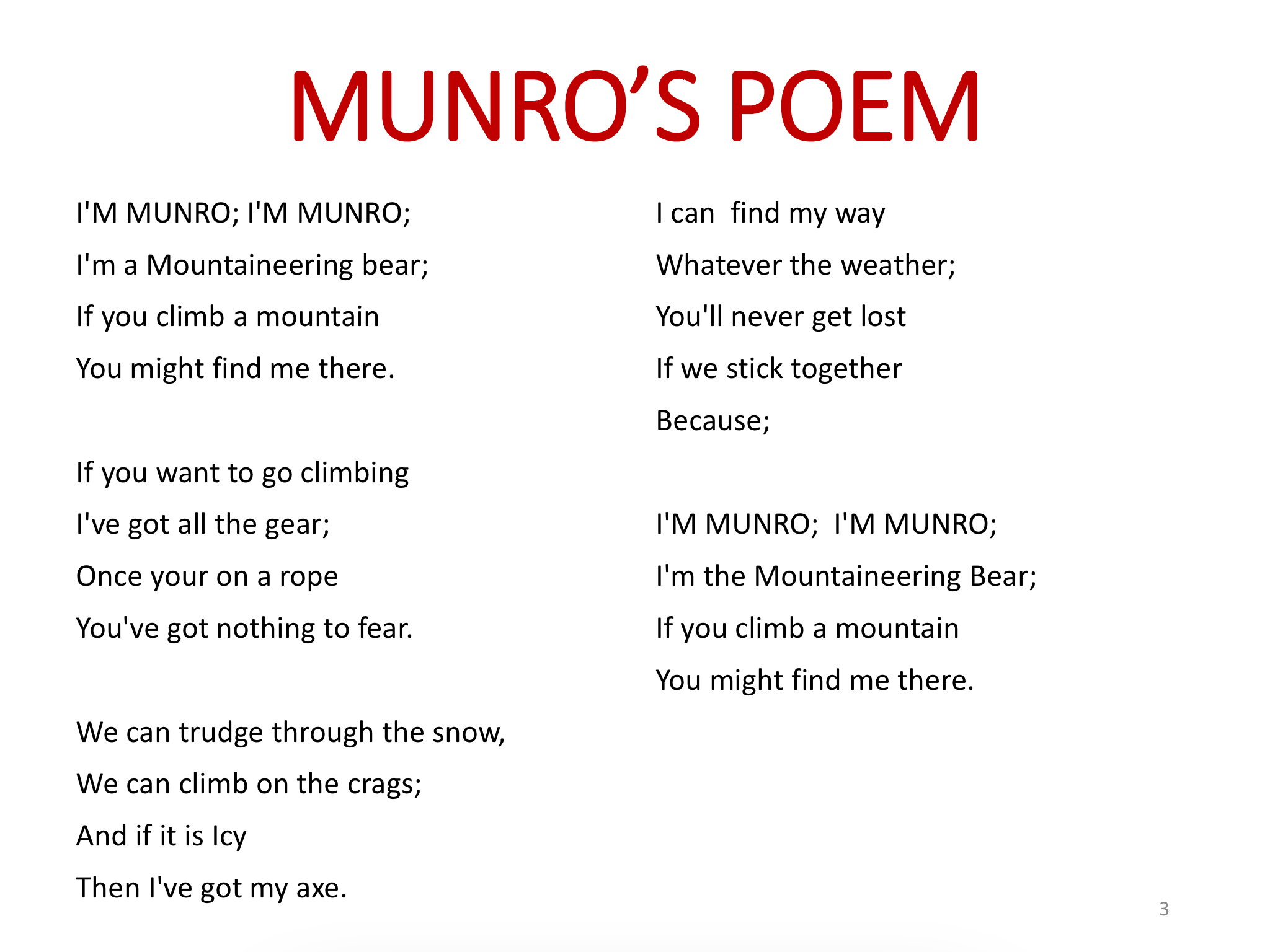 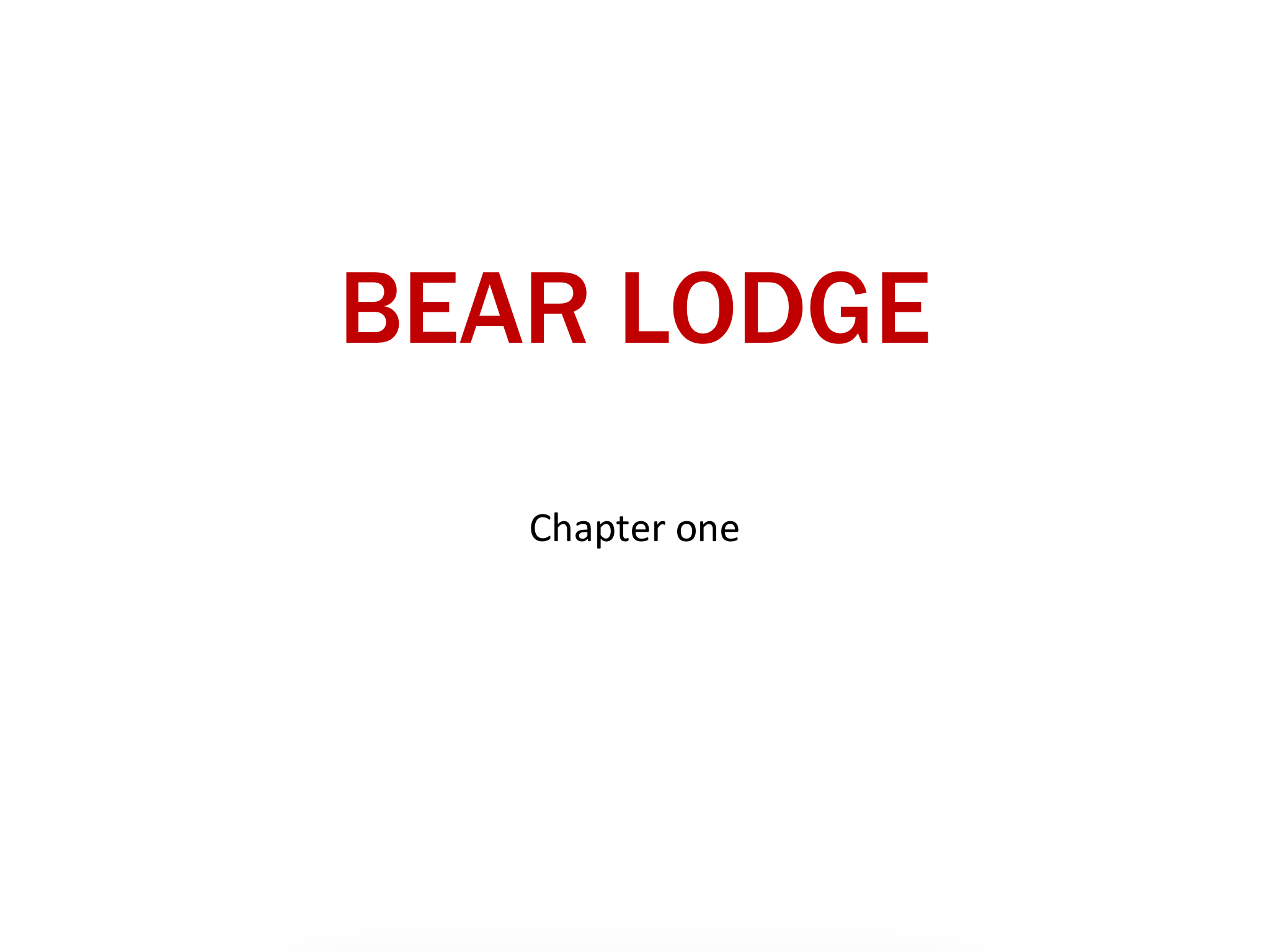 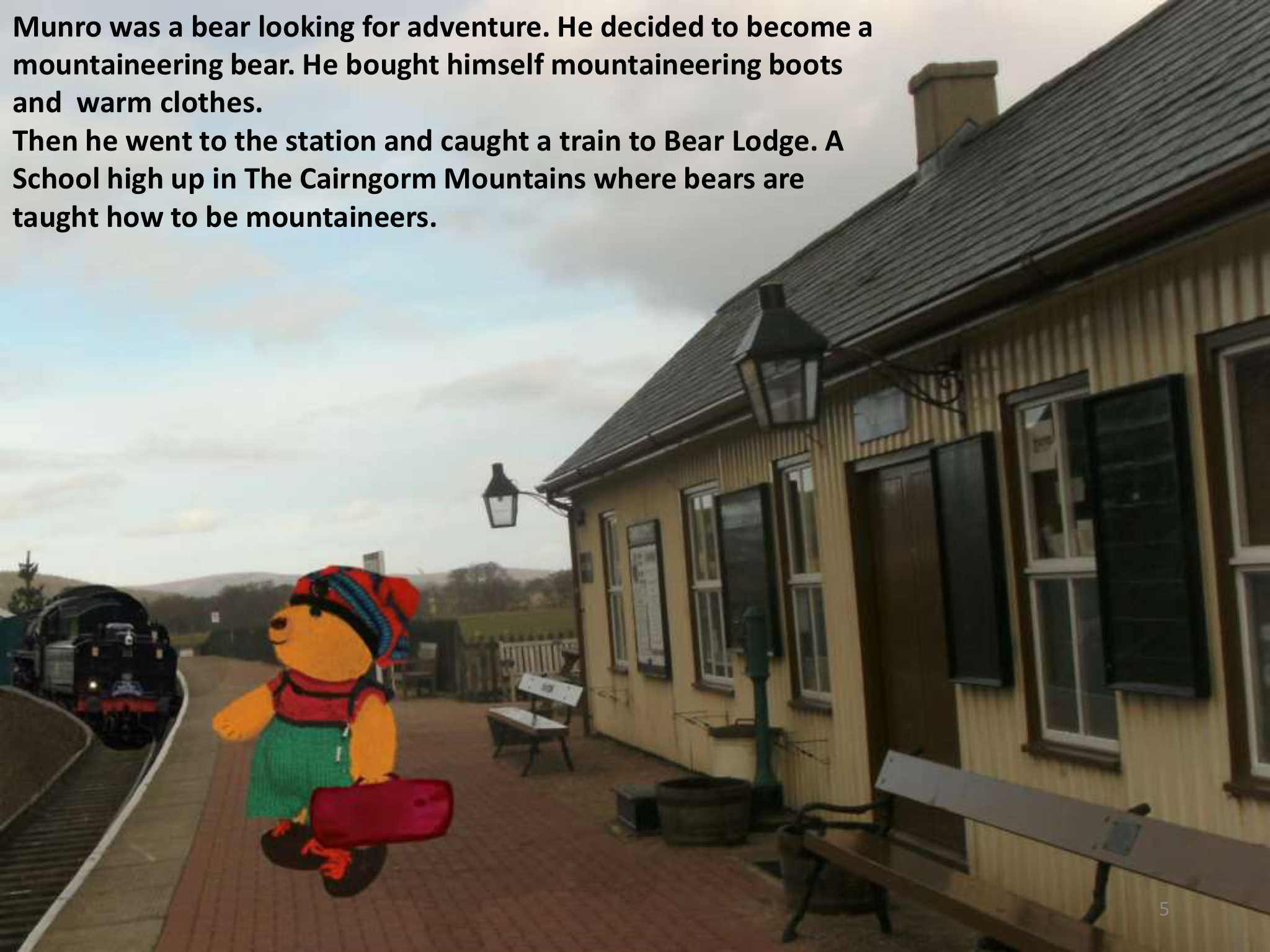 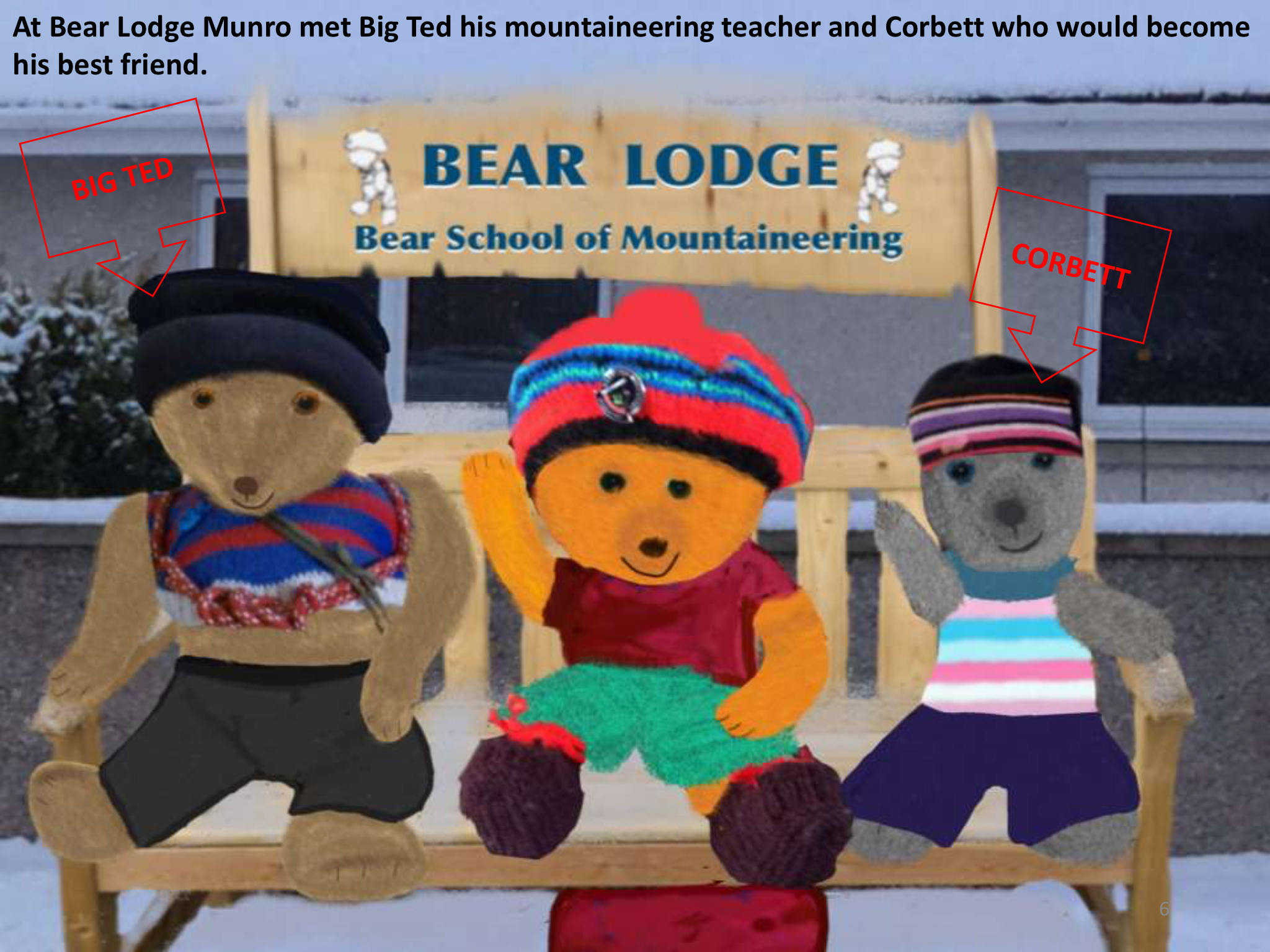 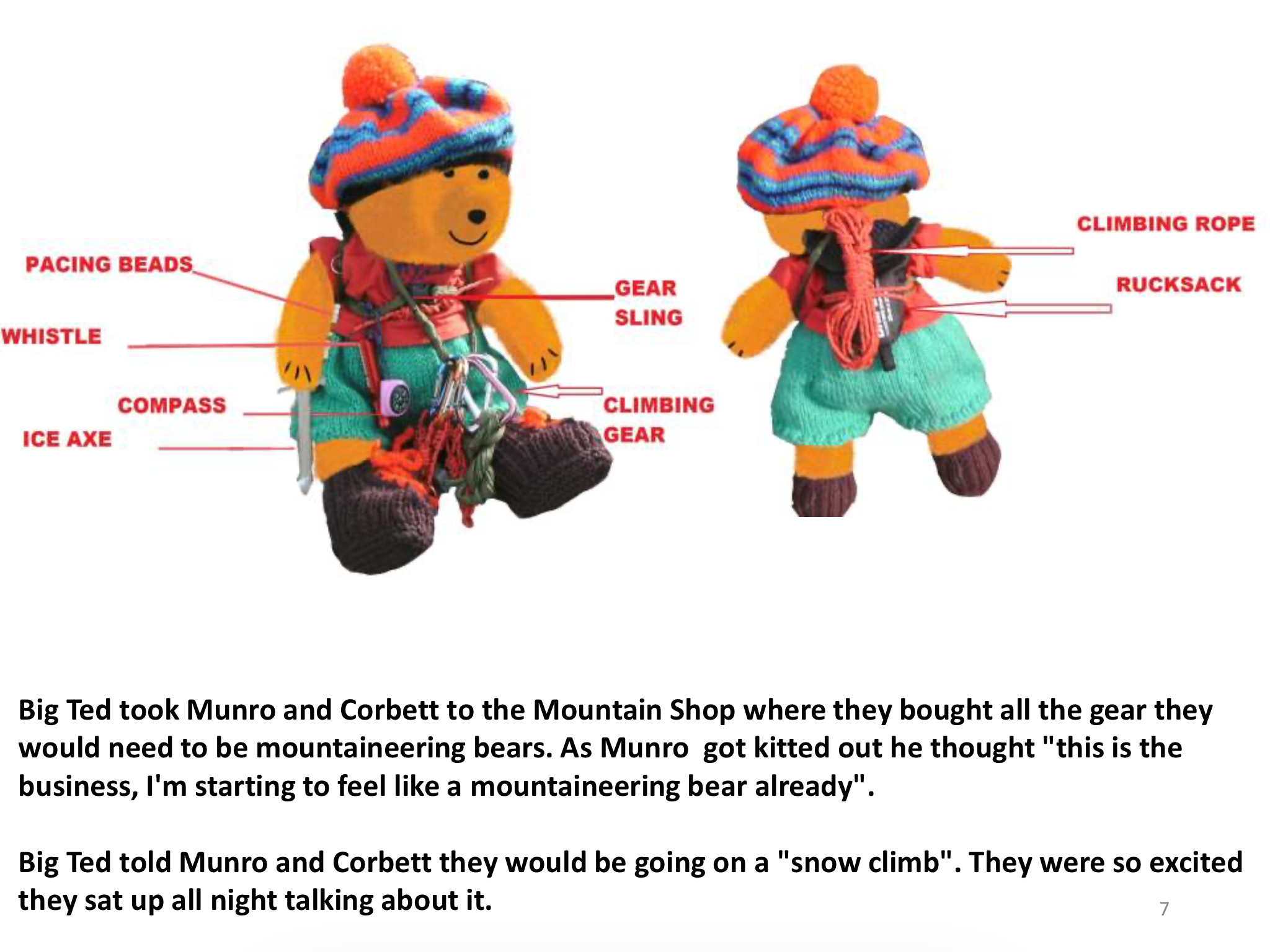 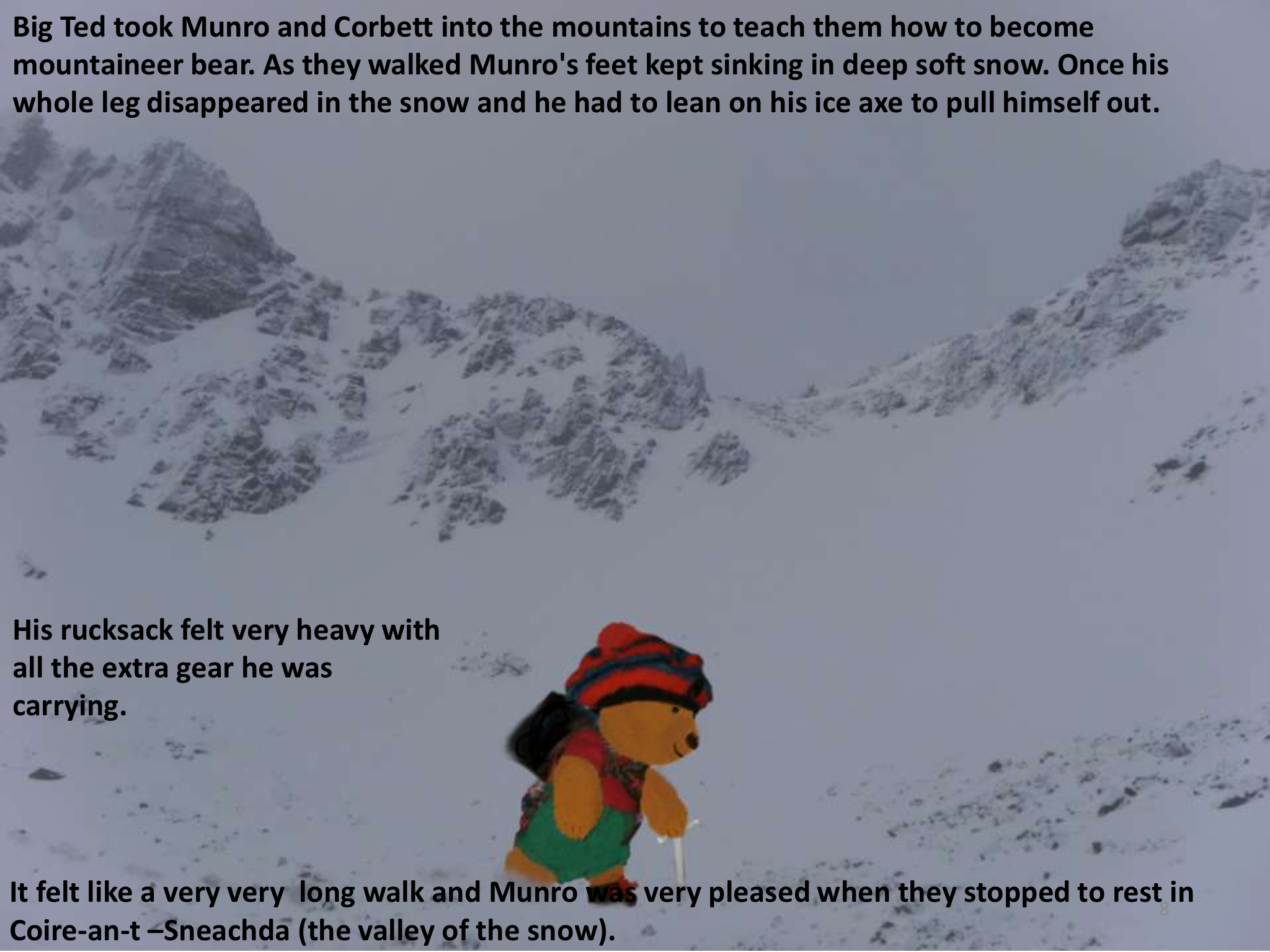 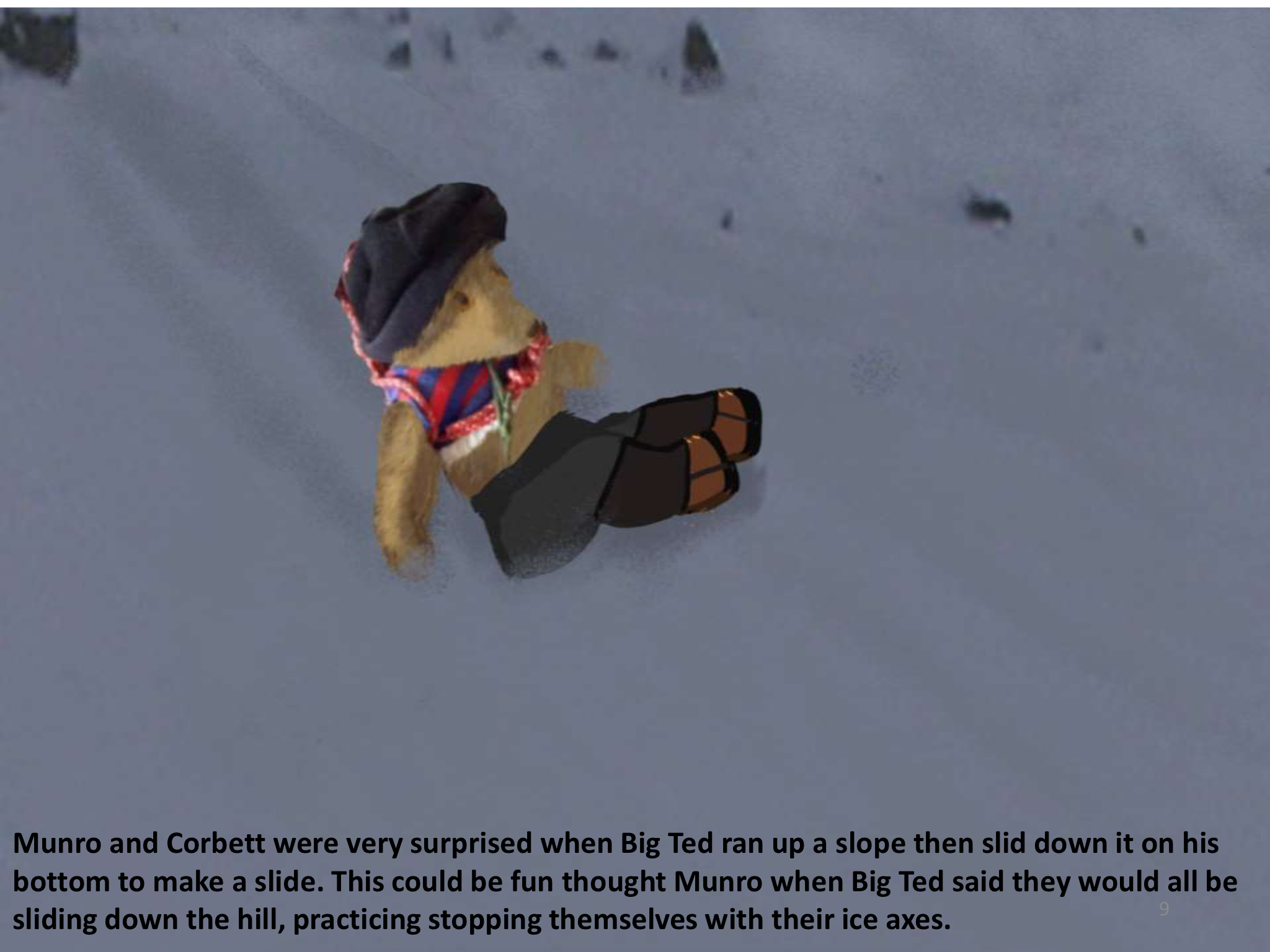 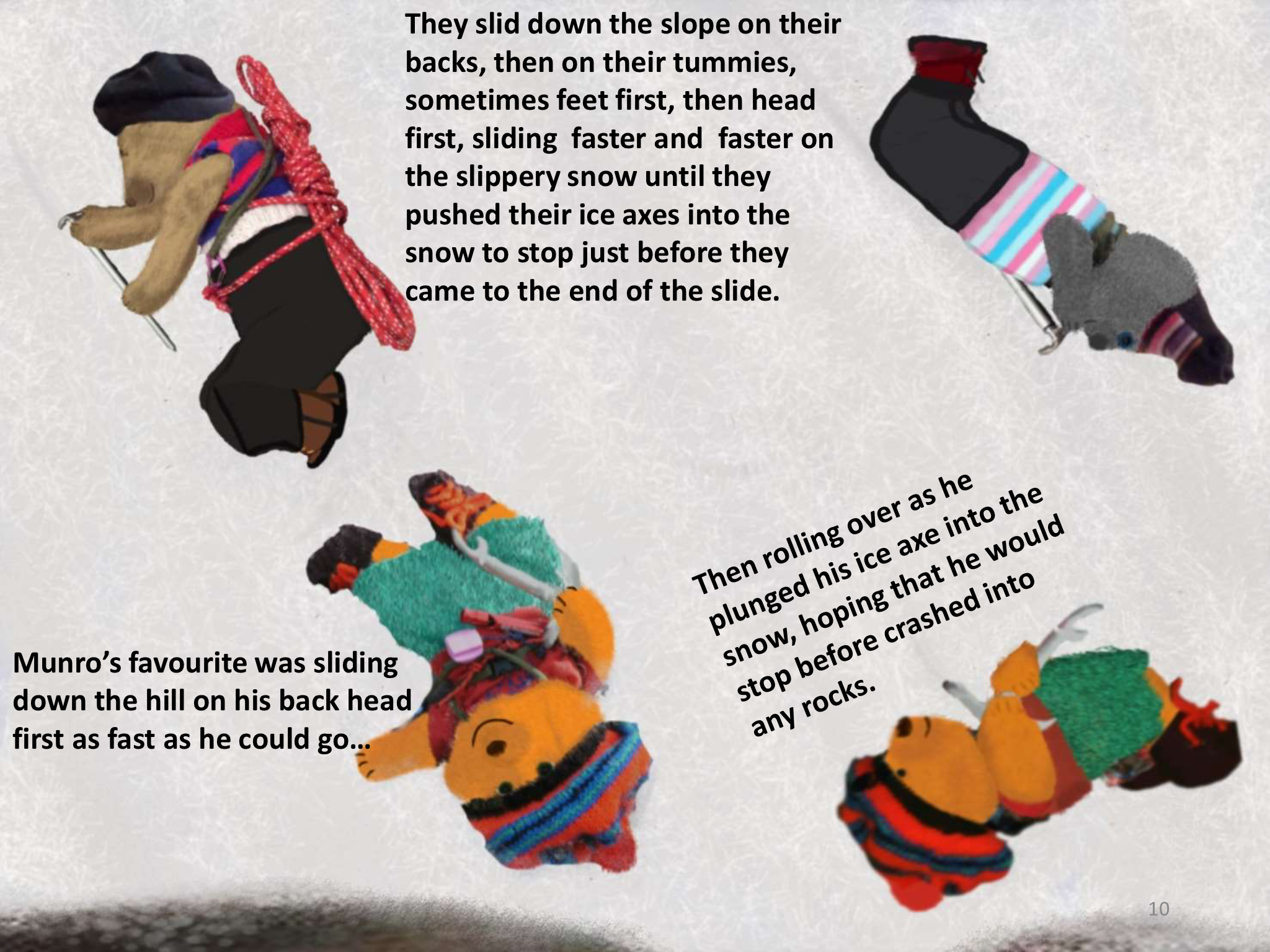 It is the first day of winter and here we are in Glen Coe, four mountaineering bears and a mountaineering lamb are ready for adventure. Behind us nestling, between the peaks and ridges is a whole world of hidden valleys and we are on our way to explore one of these, Coire nan Lochan. It is not the most famous valley in Glen Coe, that is Coire Ghabail, but it is perhaps wilder and more spectacular with the dramatic cliffs of Stob Coire Nan Lochan towering above it.

Although it is officially the first day of winter there is not much snow today, but plenty of ice glittering in the morning sun and making the path very slippery!

At one point the path disappears and we had to scramble down icy rock! I was worried how Alligin would manage as it was his first try at scrambling, and you would not want to slip here, with icy water below. He took to it like a mountaineering bear to rock! 👍 Don’t tell him but I think he will make a champion Mountaineering Bear!

High up in the valley Big Ted was explaining how the landscape was shaped first by volcanoes pushing up the molten rock and then the roof of Magma collapsing to form a huge crater or cauldron.Glen Coe was the first place in the world where cauldron subsidence was recognised in ancient volcanic rock. The melting ice from the ice age further sculpted the landscape ice, breaking up the crags, shattering the rock and scooping out the valleys. He did go into more detail but I was distracted by a stone in my boot! I don’t think Alligin and Sheltie were listening either as they were absorbed in reading the map, but Corbett might have learnt something.

We are hoping to come back and climb these rock faces when the rock or the snow is in better condition. Mountaineering Bears have been climbing in this Coire for over 120 years. Great Grandfather Ted, founder of the Scottish Mountaineering Bears, was one of the first bears to climb these cliffs in summer and in winter. In those days there were no roads leading into Glen Coe and the mountaineering bears arrived by horse and cart along a rough track, or even by boat along the Caledonian canal.

The magnificent valley is full of atmosphere, I can sense the presence of prehistoric beasts and bygone mountaineering bears that may have wandered here!

The further we ventured into the coire, the more wild and magical it became. Corbett swears he met a unicorn.

And I think we may have woken this dragon. Time to make a quick retreat.

It was a wonderful view point, I couldn’t resist a pose with the Anoach Eagach Ridge behind me.

All too soon it was time to head down, a bottom shuffle was the quickest method of descent on the icy grass.

We had been hoping to climb the frozen waterfall but it was melting and would not support the weight of the bigger bears.

But wee Alligin is so small and light he was able to have a go.

A magical start to winter. But, please! now can we have some snow!